If it takes our fancy and pops off our Art Deco walls, we'll hang it!

We aim to change it up every few months, sometimes featuring work from a single artist, other times we curate a group exhibition.

We hope you enjoy it as much as we do.

Art Exhibits at the Wet Fish 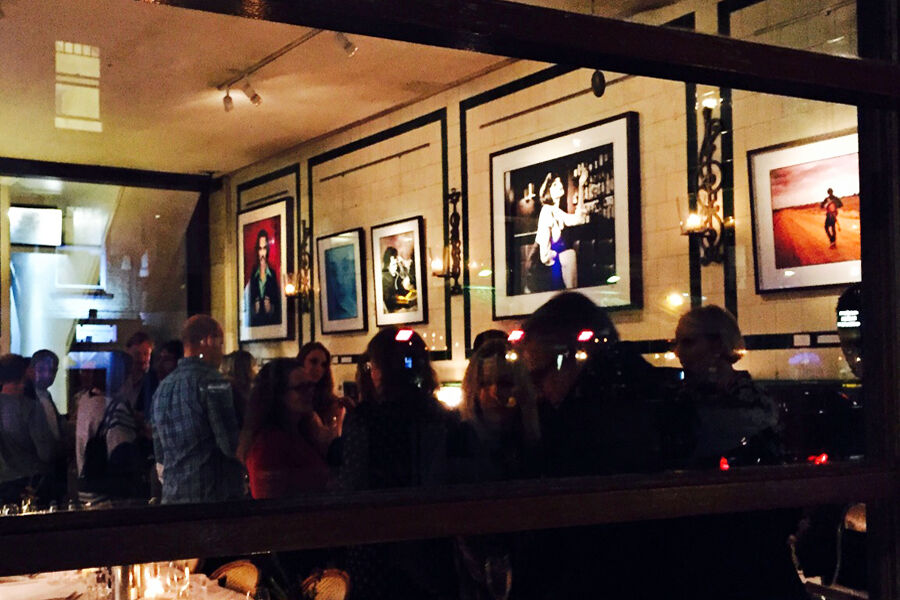 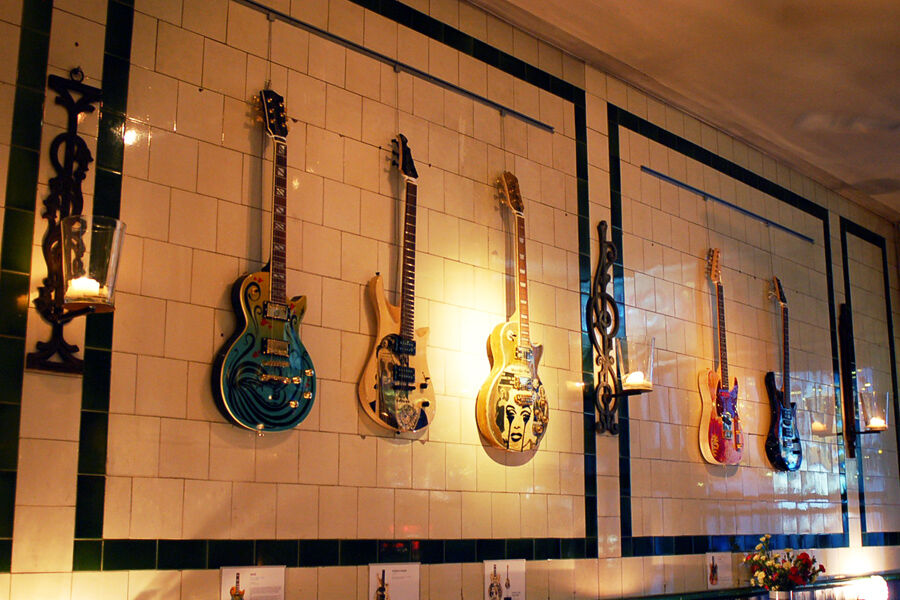 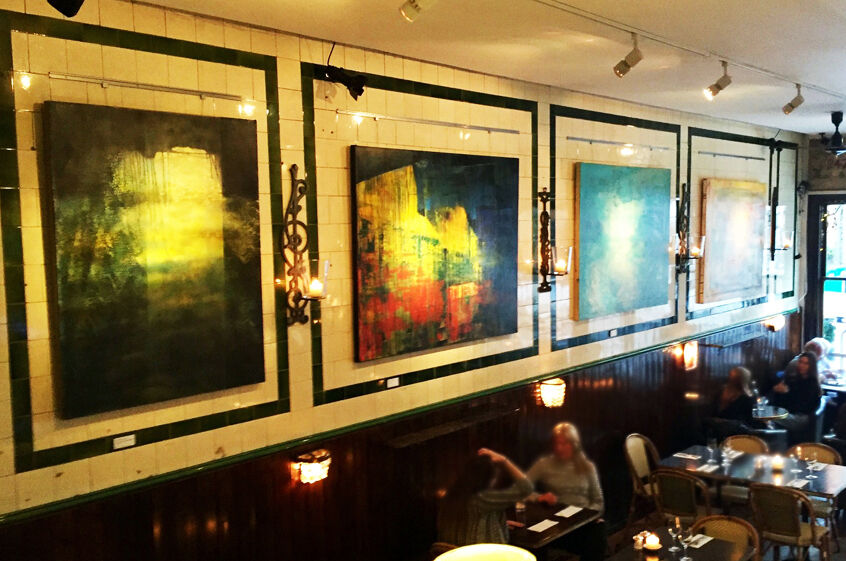 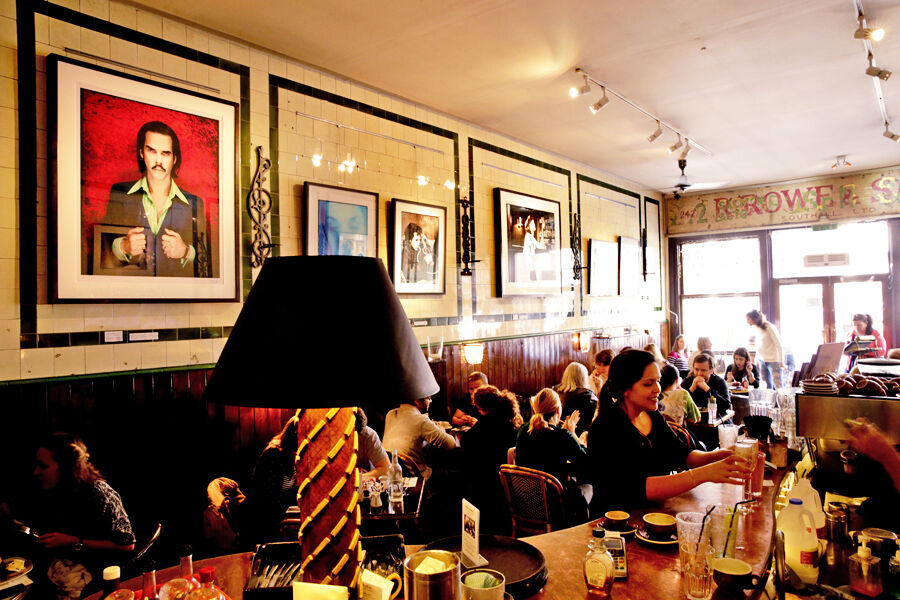 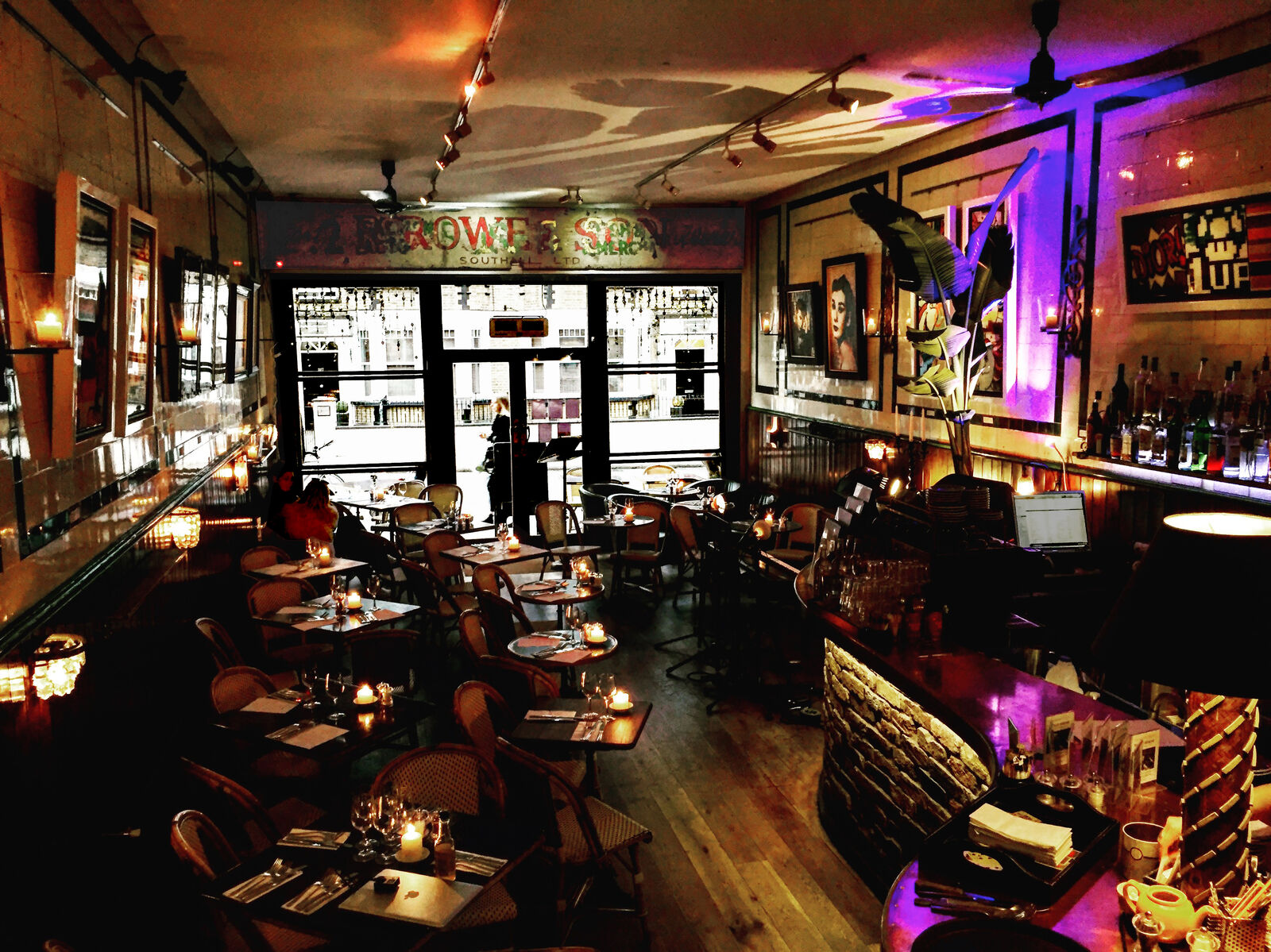 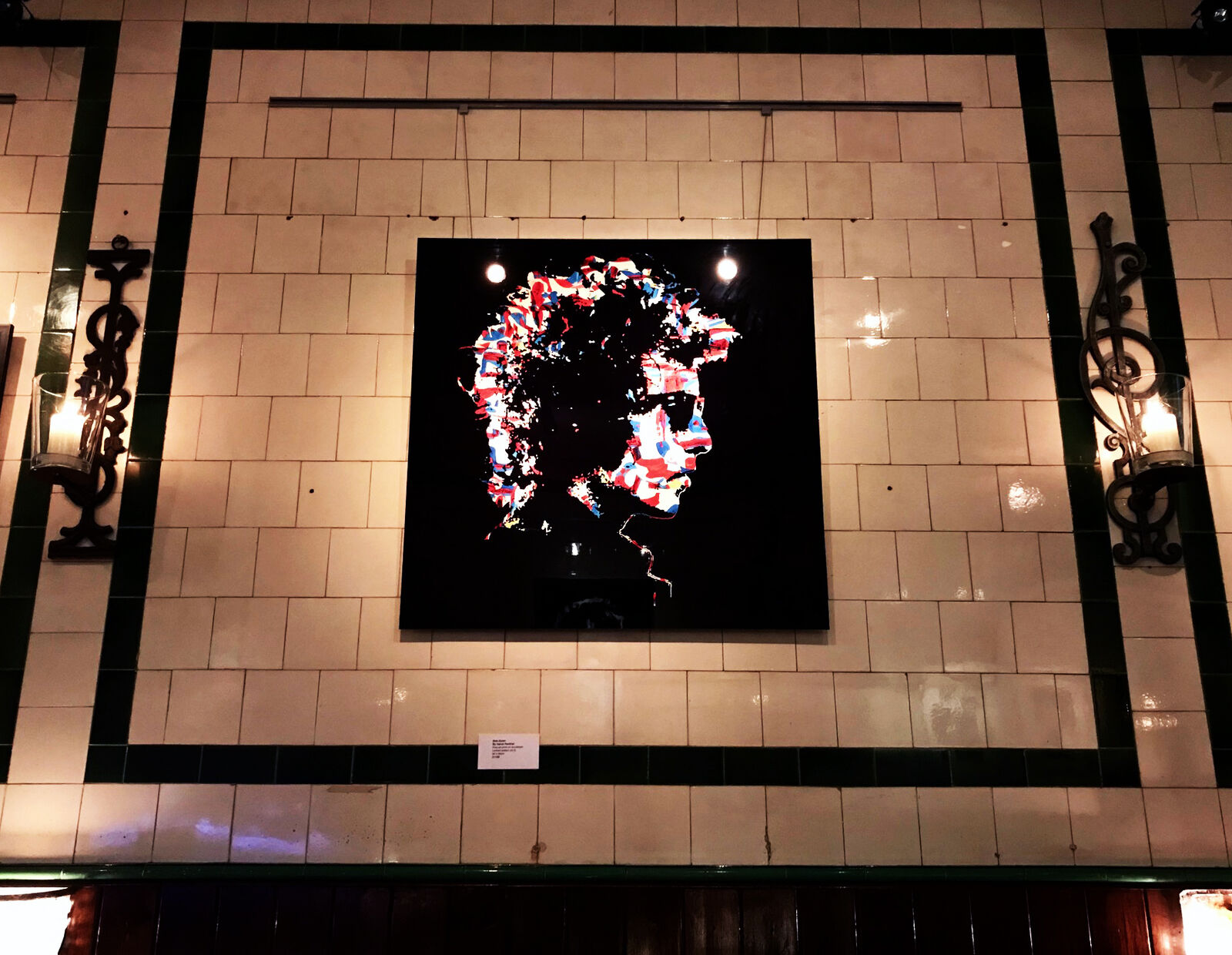 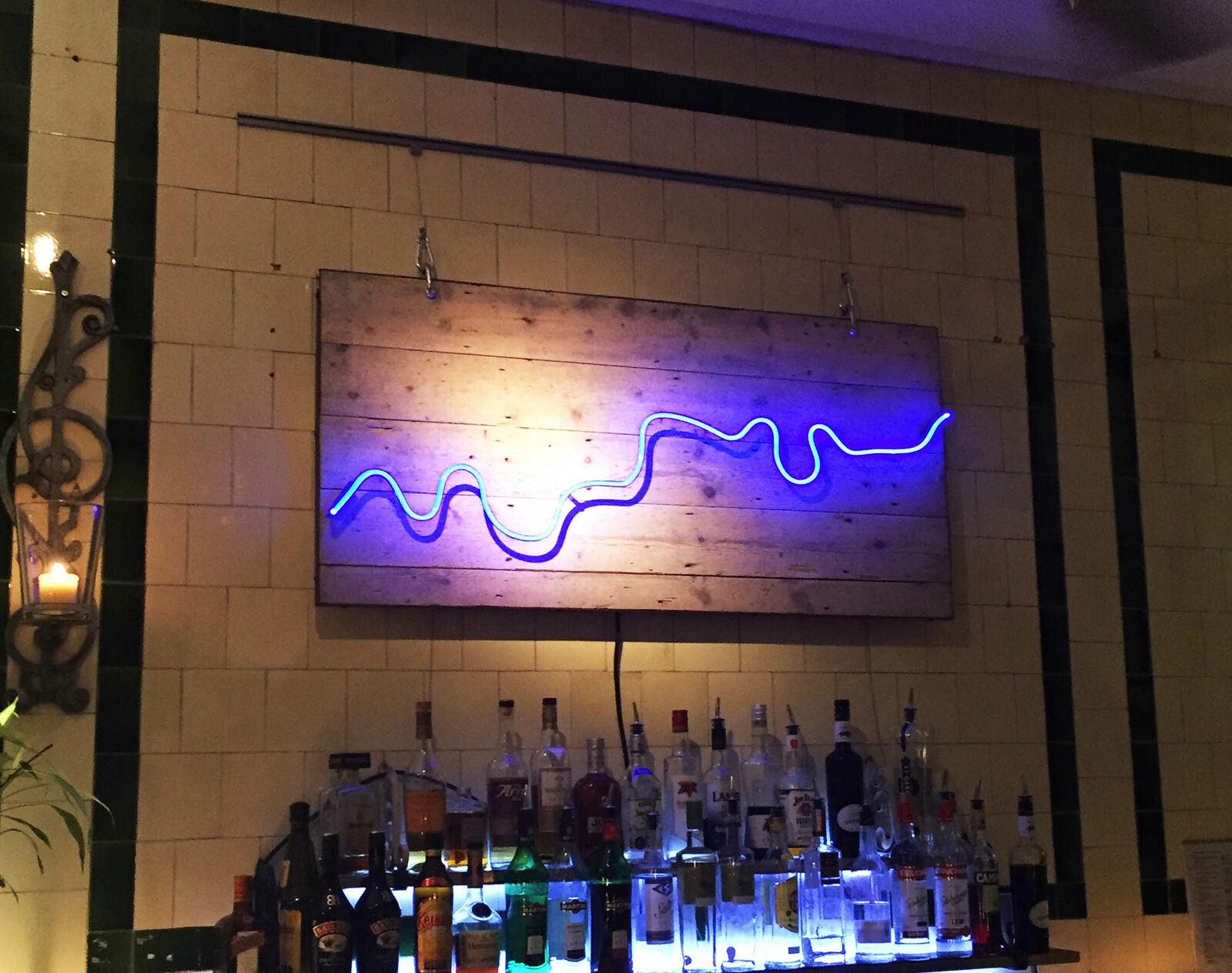 These pieces were in a recent exhibition at The Royal Albert Hall – Captured in a Moment: 50 years of iconic rock & roll photography – celebrating music’s greatest icons and influencers.

RockArchive.com, a collective of the world’s leading rock’n roll photographers, asked The Wet Fish if we’d like to exhibit some of our favourites – we jumped at it!

The exhibition showcases classic moments shot during the artists’ careers, and includes rare and previously unseen images of some of rock’s greatest bands.  Be it on stage, in the recording studio, blatantly posing or candidly revealed, Rockarchive’s enduring images take us back on a fascinating journey through rock & roll history.

All prints are on museum quality paper, signed or estate-stamped and come with a certificate of authenticity.

Incidentally Storm Thorgerson, the photographer of iconic album covers such as Pink Floyd's Dark Side of the Moon, and of this cheeky shot titled "Back Catalogue", was a regular for many years at the Wet Fish.  RIP Storm.

FROM THE Royal Albert Hall TO THE WET FISH... AN EXHIBITION BY Rockarchive.com

Captured in a Moment: 50 years of iconic rock & roll photography

During 2016-17 we had fun curating an evolving selection of art from the likes of Lhouette, Rob Bishop, Michael Abrams, Adam Butler, Ben Riley, Julio Brujis...

Some are originals, some limited editions and some are still available - just email us if any take your fancy and we'll see if we can source it for you.

Ryszard Rybicki is a life-long painter born in 1961 in Poland and briefly attended Art School in Brugge, Belgium.  Since his first solo exhibition in 1987, his works have been shown in Poland, Germany and the UK where he moved in 2004. In his paintings he conveys the relationship between intellectual and emotional perceptions of the world. He has designed and provided art for domestic and business interiors and is a long-standing artist-in-residence at Mary Ward House in London.

Chris Smith's career in sports photography started at the Observer in 1970. Six years later he joined the The Sunday Times, where he worked for over thirty years. He won The Sports Photographer of the Year four times and the Individual Sports Picture of the Year twice.

This collection features a selection of Chris most renowned shots of Muhammad Ali. The images reveal the complex personality of one of sport’s most controversial and best loved characters. The works portray Ali's composure and confidence as well as his wit, intelligence and theatrical personality.

John Reader was a London-based photojournalist during the busy 60s and 70s, regularly on assignment at home and abroad for the Sunday Times, Observer and Telegraph magazines as well as for foreign publications – among them Paris Match, Stern, Epoca, Time and, in particular, for LIFE Magazine.

The subjects he covered ranged from the heart-rending – the Aberfan disaster, to the exotic – the Kings of Africa. The images are distinguished by his ability to capture the expressive off-script moment – as evidenced in the pictures exhibited here of Michael Caine filming Billion Dollar Brain in Finland, 1967, a Rolling Stones recording session in1967, and Yoko Ono & John Lennon in1968.

Paula Wilkins... how to describe her work? She likes to communicate ideas using a variety of mediums. Her images evolve, gathering characteristics at each stage which alter them through enhancement or degradation, dislocating them from their original state and intended meaning.

We've paraphrased from her own website and hope we've done her methods justice. In any case, we absolutely LOVE her "Tracing the Future" series showcased at the Wet Fish, in which she's given new narratives to iconic renaissance works. They vibrate off the walls!

Michael Wallner digitally manipulates his photographs to produce unusual art installations using a variety of sufaces and mediums. Here we have images printed directly onto brushed aluminium, giving an etched impression, and a neon Thames entitled "River of Light" mounted onto reclaimed wood -- we love it!

Photographer Kevin Westenberg is famed for his electrifying images of world-class musicians, artists and movie stars over the last 25 years.

He has captured many of the most admired and also controversial figures of the music industry.  His work includes hundreds of album, magazine and book covers from all over the world.

His pictures have a characteristic signature. You could say he captures the soul of the artist.

Just email us if any take your fancy.